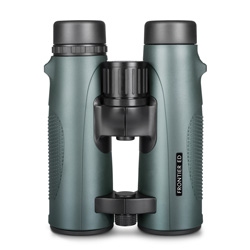 Search the net for reviews of the Hawke Frontier ED and you won't be short of results, they seem to be a fairly hot topic amongst birdwatchers who want to know what all the fuss is about. You'll be hard pushed to find a negative review on them, that's for sure. They are available in 8x36, 10x36, 8x43 and 10x43, the latter two being the more popular. Here I will take a look at all 4, picking up on advantages of each where applicable and will score them on the whole at the end.

First and foremost, optical quality. I've been able to use these binoculars in a variety of different weather conditions and they have never ceased to amaze me. At the time of writing, I have all 4 pairs sat next to me and a female Great Spotted Woodpecker pops on to the feeders about 20m away from where I'm sitting. The 10x43s are the first at hand, a quick turn of the focus wheel to bring it in and wow, the detail really is incredible. Just time for me to pick up a pair of 10x36s to see how they compare - the sharpness is a match but they don't seem as bright, the overcast conditions making it a bit more difficult with the smaller exit pupil on the 36mm models. Being the height of the breeding season, she departs but very shortly returns, allowing me the same opportunity with both of the 8x magnification models where the same applied, I was more impressed with the 43mm models again but by no means let down by the smaller ones. The ring on her leg was pin sharp and acted as a great test for chromatic abberation, such highlights are normally prone to CA (purple fringing) but the ED glass proved its worth as there was none to notice at all. During the winter, I had a good look through the 8x43s at dusk, a time when light is low but as most eager birdwatchers know, like dawn, a great time to be out birding. They again impressed me immensely, compared to some cheaper models they really showed their worth, still bright with good colour rendition and contrast. One of the most notable features of the Hawke Frontier EDs is the field of view, on all models it's significantly higher than most other binoculars in the same class, the 8x43s boasting a huge 142m@1000m or 8.1 degrees. This is absolutely fantastic for track and trace birding, locating and following a bird in flight is a doddle, but being made to a budget, as expected, I found the drop off in sharpness at the edges quite noticable, with a bit of distortion too. With such a wide centre sweet spot, it never caused me any trouble during the time I've spent testing them. 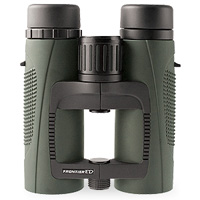 The body on the Hawke Frontier EDs is made from magnesium alloy and covered in a textured rubber, protecting it from any bumps or scrapes during use. Each element certainly feels robust and I felt confident using them, at no point did I put them down thinking 'I wish they did this differently'. The click stop diopter and 3 point eye relief is the same on all models, each offering good resistance against accidental adjustment but smooth and easy enough to place just where you want. The focus wheel is large, well gripped and turns quickly to allow for fast yet precise focussing. It's worth noting that all of Hawke's binoculars are made in China, rather than any coming out of Japan, where supposedly the quality control is better. You would perhaps notice the difference if you were to hold these side by side with a pair of Swarovskis, but then again you couldn't pick a pair of the latter up for under £300...

In terms of comfort, I have found no fault in all my time spent with the Frontier EDs. Being small, I have always favoured slightly smaller binoculars and therefore was sceptical about how the big, heavy 43mm models would hold, but they are now without doubt my favourite pair for ergonomics. All feature the open hinge design, which as well as reducing weight also makes them beautifully comfortable to use, both with 1 or 2 hands. All of them also benefit from the textured rubber on the sides, allowing that extra grip and simply making me feel that bit more reassured. Only on the 43mm models do you find the indented thumb patch on the bottom of the body, perfectly positioned to allow an even better squeeze on the bins.

Oddly, as things stand (28/05/2013) the smaller models are supplied with a hard case and the larger ones a (very decent) leather one. I'm not sure which one I'd prefer, far more important factors for me are on the binoculars rather than the case, though of course many of you take them out and about with you within the case so it could be a deciding factor. The straps, or lanyards, are of course wide and padded, the lens caps are designed to stay on and the rain guards are removable. As with all of Hawke's binoculars, the cleaning cloth is very basic and the warranty is 10 years.

I couldn't find many things to pick at all during all my time with the Frontier EDs - there are those that say they are as good as the 'alpha' brands but here I beg to differ. They're not the same, the edges are a tad soft, as sharp as they are in the centre they're not as good as some others and they aren't built to the same standard, but for around £300 you simply cannot expect these things. In fact, for about a fifth of what you may pay for some other brands, you're getting perhaps 90% of the capability, so put that way they really are an incredible piece of kit. The 43mm models are the better performer, just, but the 36s of course benefit from being lighter weight, smaller (though still not what I'd call small!) and cheaper. As I finish writing, a Robin hops in to the shop to allow me one last look through them all and still I can't decide which I like most, maybe I'll just keep all 4...

2014: The 36mm models have been discontinued in favour of a top hinge, smaller, lighter 32mm model. Read the review of those HERE