Released in early 2012, the ED-Xs from Opticron are set to make a bold statement. As a pair of ED Binoculars for around the £300 price point, the ED-Xs are competing against very few other models so are instantly bound to become a hot topic amongst birders. The question is, how do they perform? Lets have a look.

The advantages of ED (Extra low Dispersion) glass is the increase in light transmission and the handling of CA (chromatic aberration). I certainly felt the latter was hugely improved over standard glass optics with colour fringing barely noticable at all. The increase in light was certainly noticable too when compared to other Chinese optics, though a (slightly more expensive, Japanese made) Opticron Countryman proved a better performer during twilight hours. Testing the 8x42s today in overcast conditions, a skulking Blackbird proved a worthy test as it flitted under the Buddleia bush. I was very impressed by the level of detail retained by the ED-Xs, though the contrast perhaps left a little to be desired. On the peanut feeder, a pair of Blue Tits obligingly hung around while I was able to compare the ED-Xs to Opticron's Explorer WAs, another fantastic performer for the price. The 8x42 ED-Xs easily proved their extra cost, however, as detail, colour and contrast were all evidently better thanks to the ED Glass. Similarly to the Explorers, the ED-X models feature wide field eyepieces, the 8x42s benefiting from a substantial 7.5° (131m/1000m) and the 10x42s a class average 6.2° (108m/1000m). The wide field of view on the 8s did, as Opticron's website suggests, offer a panorama-like view. The 10s obviously don't produce quite such a wide picture but the sacrifice is not without an advantage; the extra magnification allowing me to get significantly closer and pick up more detail on distant objects, generally making ID that bit easier in the field. Edge sharpness was, as I've come to expect from Opticron's binoculars, impressive. I only found a small amount of softening at the edges but the ED-Xs performed better here than any other Chinese pair I've reviewed previously. Close focus is stated at just under 2m, about average for their price but none-the-less ample close enough for watching butterflies and insects. 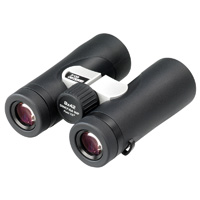 If you're wondering how Opticron can offer ED Glass for under £300 where so many others will charge closer to £1000, the reason is the ED-X's are made in China, rather than, as with most EDs, Japan. Their construction is none-the-less very sturdy. Weighing in at 650g and measuring a mere 136mm in height, they're very small and light for their class yet each component gave me the impression of solidity. From the time I spent using the ED-Xs and their comprehensive 10 year guarantee I feel confident they'd stand the test of time.

Similarly to an open-bridge design (like that on Opticron Veranos) the micro-bridge assembly on the ED-Xs allows more room (compared to a standard bridge) for your ring and little finger to grip the end of the body with the middle finger comfortably resting on the bridge while you focus with the index. This extra grip certainly made me feel more confident using them and one handed operation is easy too owing to their light weight. The focus wheel runs smoothly, albeit perhaps a little stiffer than some other Opticron models. The twist type eye cups give good eye relief and were smooth to use, though I would have liked them to have held a little firmer during each stop. The click stop dioptre was also easy to use and offered good resistance, giving the impression it wouldn't be budged all too frequently during use.

The ED-Xs are supplied with an pro series ultrafine microfibre cleaning cloth, a soft neoprene case and an impressive padded lanyard. As mentioned, the ED-Xs also benefit from a 10 year guarantee. I certainly don't think Opticron have skimped on accessories, each item was of a optimum quality and round off what ultimately are a fantastic pair of bins.

The ED-Xs offer a bright, sharp to the edge, wide image for a more than affordable price. Thanks to the extra low dispersion glass, they produce an impressive image from dawn til dusk and owing to their light weight and padded lanyard, would be no burden to carry around all that time either. For general wildlife watching, the 8s would certainly be my choice, offering a better field and view and slightly brighter image, but if you want to get that bit closer, the 10s are the way to go.

16/05/14: Opticron have discontinued the ED-X binoculars