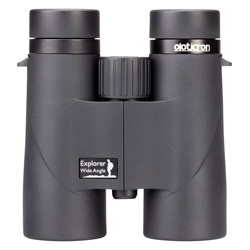 When the Opticron Explorer WA was introduced back in early 2012, they held their own against the competition. In 2015, the light transmission was improved with Opticron's Oasis-C prism coating. A year later, Opticron added ED glass, and then earlier this year the Oasis-C prism coating became Oasis-C+. All these upgrades haven't come at a huge cost either, with the RRP still lingering just above £200, just as it was back in 2012. 6 years on from my initial review, I take a look at the 2018 model to see how things have changed.

The highly respectable field of view has been retained, being 7.5° and 6.5° on the 8x and 10x42 respectively. Thanks to PC (phase corrected) coatings, sharpness is very good and retained well throughout the image, with a small amount of softness creeping in at the edge of the view. Close focus is also the same as it was in 2012 at 2m and 2.5m for the 8x42 and 10x42 respectively. In my test, I could get closer to 1.5m on the 8x42 and a fraction under 2m on the 10x42, so Opticron's specs seem a bit conservative. The addition of the Oasis-C+ coating has improved the binocular's performance in low light. As I write it is pouring down with rain, a welcome change from the hot, dry weather we've had for the past 2 months, and actually a great day to put these to the test. Although I haven't got an original model to compare with the latest, when pitted against a Trailfinder 8x42 (which doesn't have the Oasis-C+ coating), the Explorer 8x42 was certainly brighter. A dunnock searching for food between the rocks and logs in our nature area proved a worthy test and I could discern better detail with the Explorer. The sound of calling mistle thrushes caught my ear and I spotted them 100 metres or so away lading at the top of the huge yew tree in the farm house garden. This sort of scene is a perfect test for the ED (extra-low dispersion) glass, and the Explorer binoculars showed no sign of any colour fringing, whereas the image on the non-ED Trailfinders had obvious chromatic aberration. The Explorers therefore were more pleasing to use, with superior colour and clarity over their less expensive cousins. As the mistle thrushes sat in the rain, I was able to swap to the 10x42 Explorer, with which I appreciated the extra magnification given the distance, but I found in the poor light the 8x were noticeably brighter, so it's a bit of a trade off between the two. 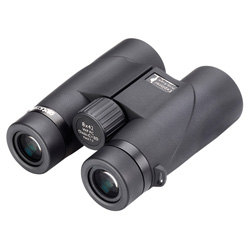 Making the most of wet weather, I took the opportunity to pit the Explorer WA ED Oasis-C+ against the Hawke Endurance ED, Viking Kestrel ED and Vortex Diamondback. On paper, the Explorer with their ED glass and Oasis-C+ coating is only matched by the Viking Kestrel, which also has ED glass and dielectric prism coatings. The Vortex Diamondback isn't ED but is dielectric, while the Hawke Endurance is ED but isn't dielectric... Ultimately it means the Explorer and the Kestrel have the edge over their rivals optically, while the Endurance and Diamondback are sleeker, more stylish and offer better warranties. I highly recommend trying before you buy if you have the opportunity, but otherwise consider which factors are the most important to you before making your decision.

Physically the Opticron Explorers haven't changed much, with a slight increase in weight thanks to the improved glass, but no change to the overall dimensions, eye relief or focus mechanism. As the saying goes, if it ain't broke, don't fix it, which certainly applies here. The focus wheel is smooth, taking approximately 1.5 turns from close focus to infinity. The 3-stage twist up eyecups hold in place nicely at each stop, while the dioptre isn't likely to be accidentally adjusted when set. Underneath the very slightly textured rubber armour is a body constructed from a combination of aluminium alloy and polycarbonate, which is completely waterproof and nitrogen gas filled. As with most binoculars in this price bracket, they are made in China.

As they were back in 2012, the Explorers are perfectly comfortable to use for a day's birdwatching. The traditional single hinge design is fine, while not leaving as much space for wrapping your hands around the barrels like you get with a open or top hinge binocular. The aforementioned rubber armour provides enough grip to ensure the binoculars aren't going to slip out of your hands. There are very slight recesses in the armour on the underside of the barrels, but they are at the wrong angle to be thumb indents, so I can't quite work out their purpose.

The accessories haven't changed over time either, with a fairly decent soft case which has its own strap, traditional style rainguard and tethered lens covers and a quick-release type padded lanyard. My gripe with the lanyard is there is little to no room for adjusting the height at which they hang, and I see no real practical need for the quick release clips. The comfort of the strap is good, but for those of you who like their binoculars to hang high on your chest, you'll have to purchase another lanyard separately. Opticron offer a 10 year warranty on the Explorer WA ED Oasis-C+ models, which covers labour and materials for the first 5 years and then only material costs for the remaining 5 years.

With the changes Opticron have made to the Explorer binoculars in the past 6 years, they are certainly a marked improvement on the original models. However, it's more of a case of Opticron keeping up with the competition rather than leaping ahead, so my scores and overall rating have remained the same as they were in 2012. But just as they were back then, the Explorer binoculars are a sound investment, offering the keen wildlife watcher with a super all-round binocular without breaking the bank.